For many years, I relied on OpenVPN to connect distant sites, configuration was so hectic that I ended up writing my own tool to automate the process. As I'm often working in different (but fix) places - I have been considering setting up a mesh VPN for some time - but it always looked quite complex to manage.
With the rise of Wireguard, its small attack surface and easy configuration, I have been using it for over a year and am very happy. As configuration sligthly changed with OpenBSD 6.9 (it is even easier to setup now) - the mesh VPN now looks like something I could achieve! Actually I'm not sure I will get it working, but I'm sure that if I don't start documenting the process from the start, I will never do so.
In this post, I will wander through my ideas, my first tests look promising, but with every answer come many questions... so let's start here!

The idea of the feasability and requirements came to my mind while reading ianix.com Howto: WireGuard on OpenBSD:

One late night (yesterday), I did a short shellscript, as a prototype... it looks promising - but is still incomple and "probably" has hidden bugs!
Running it is fast and straightforward as you can see: 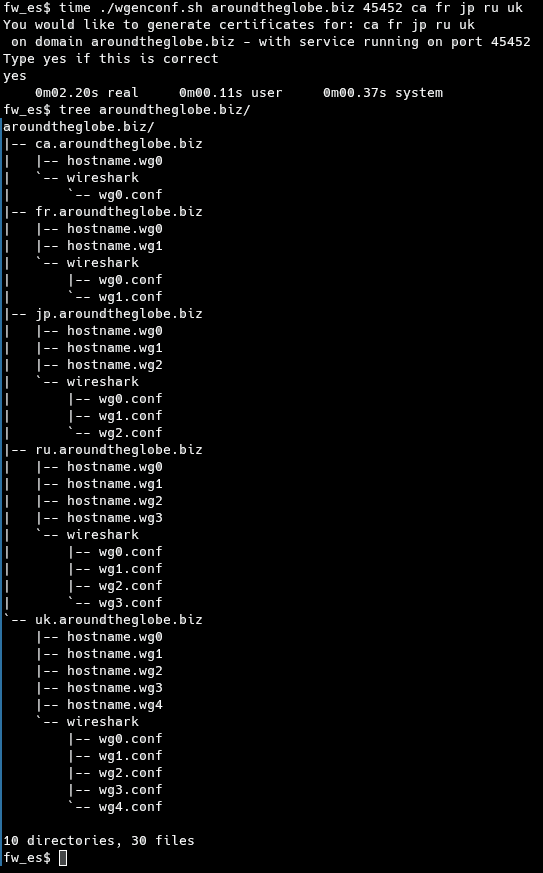 Here is an overview of generated configuration files: 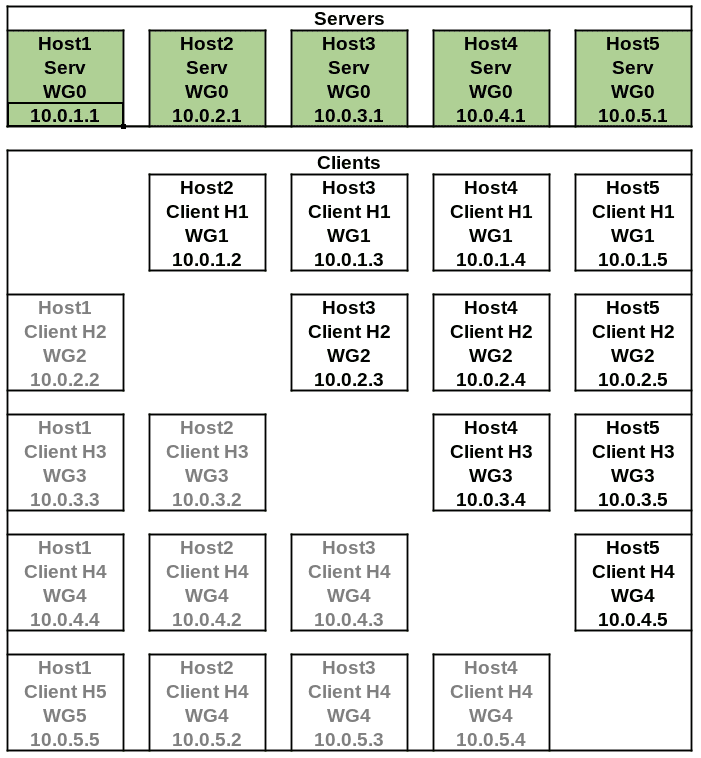 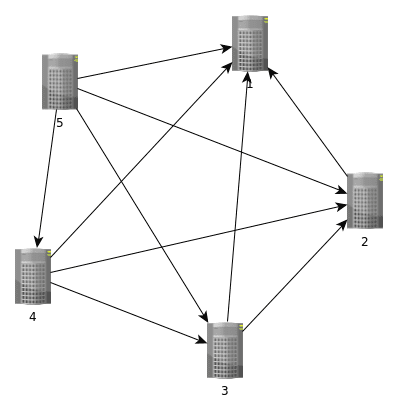 This "algorithm" is the simplest and most efficient I could think of: just put your most reliable sites in front of the list when configuring.

Shellcheck almost agrees with my code now 🕺
I wasn't sure about how to manage pf nor routing rules.
Then the solution came to my mind while taking a bath... it would actually be very easy if I use predictible IP ranges for my internal subnets!

It all works alone because I work on single digits in the code, with $clientcount and $servcount. This is also why there is a limit to 9 nodes: at 10 we would be routing 172.210.X (public range) - and hard to debug issues might popup in your network at some point in the future! So if you want to use more than 9 nodes, either remove the 172.2X range from the code (254 max nodes then) - OR update the whole code to be able to use 172.16/12 (more work)

Update 20210829 Squashed a few bugs, you can now get wgenconf from bitbucket.

Note: for the domain names, I use ddclient, which allows me to have hostnames on dynamic IP.
As you can see, it generates a clear hierarchy of files for each server, from there, you just scp the tar.gz on the right node, cp hostname.wg* and the wireguard folder in /etc - include the pf lines where they belong in your pf.conf (can't be automated) - and add the contents of routing.info to /etc/rc.local - either restart services or reboot and this node is up.

I was absolutely amazed by the ease of finishing this script. It is one of the first scripts I ever write in ksh - and while I expected this project to keep me busy for a couple of weeks, it only lasted for a couple of days. The fact that I was able to do this in two days with only 60 lines of code and that it only takes a few seconds to generate a complete mesh config (keys, ip, routing, filtering) with a single command - is a testimony to the high quality of the work of the OpenBSD team and Jason A. Donenfeld (wireguard's developer): Thank you!