Climate change is the hot topic today, yet we are failing to act at the required scale. This post will try to explore some possible reasons behind that behavioural denial - and propose the base of a reflexion in the hope of finding a path towards a solution.
I am very far to be done with my personal reflexion on this topic - but as I might never finish it - I decided to post a work in progress.
Also I'm done writing the the next little post, So I'll post this one as is, keep posting other ones, and come back to this one from time to time!

Are a tiny bunch of people having important decisions on how to best manage a country.
Politics is a controversial topic I do not want to delve in, but we can not deny its importance in the environmental crisis.
On the one hand, the environment is not at the top of politicians priority: it is a long term goal, and they will be out of office long before the effects of any climate policy are notable. Politicians much rather act upon short term goals which they can brag about in the short term to get reelected. Isn't any resource invested in long term projects diverted from their short term objectives (employment and growth).
On the other hand, government decisions must be backed by the people: Recycling has been compulsory for over 10 years, and many people still throw recyclable plastic in the non recyclable bin. When the French government announced a steep rise of the price of petrol, a social movement called " les Gilets Jaunes" paralised the country.

Governments remain baffled by the fact that there is one set of law which they can not change: these are called the laws of physics

Have been studying climate for centuries and have been warning us for decades. As for any scientific theory, there are different views, and as for any matter of economic importance, corruption is looming around
As we have a tendency to prefer the "easy way", many people/companies/governments got stuck in denial: "We've been operating like this forever: why would I be the one to change? I will just keep my habits until this whole climate hoax blows away"

Must be profitable - and need to grow. They are responsible for the well being of their employees and care for answering the needs of the market.
One can say that bigbeverage.inc plastic bottles are destroying ecosystems and ruining the planet - but shouldn't that one stop purchasing plastic bottles in the first place?
If bigbeverage.inc was not selling it's plastic bottles, for sure they would stop producing them!
bigbeverage.inc's responsability is to provide affordable - alternative packaging - to use 100% recycled plastics - to be competitive AND ecofriendly - easier said than done!
bigbeverage.inc is not a research company in packaging material, they depend on their providers!
Also, when logistics and raw material costs make the plastic bottled liter of bigbeverage.inc 50% cheaper than the glass or aluminium alternatives - the consumer often makes the greedy choice.
If governments impose taxes on those "dirty materials" then compains start to enter in the name of free trade and state interventionism...
I am deeply convinced that many people at bigbeverage.inc company would like to change, but they also would like to keep their job!

Economy and finance should two separate things, but through mundialisation, became a humongous, intricate, emotionless blob

A word that etymologically is about the art of admisitrating the goods in a sensed manner - and was later derived as a science studying production, repartition, distribution and consumption of wealth through our society.
The particularity of this science is that its axioms where not defined by nature, but by humans. One of these assumptions, led to the myth of infinite growth on a finite planet
And indeed, everyone is expecting to see a growing economy - while this assumption is fundamentally flawed.

Now that we assume that the economy will grow indefinitely, we can create instruments to facilitate that growth. Indeed the economy needs liquidity to grow (still assuming goods are unlimited), and some entities would like to provide it, as long as they can capture part of that growth. This is where finance appears
Now finance is like computers, it evolves quickly - and when you have an issue somewhere, you can probably imagine of some kind of concept that allows you to cather for that demand of the market.
Combine volatility, risk, potential profits, time, speculation, inflation, ... Finance can help any issue right (aka : when you have a screw, everything looks like a hammer)
Financial instruments are much more diversified than what people usually believe! Did you know about Weather derivatives

"Modern agriculture" is a main driver behind climate change, not only is considerable energy and chemicals used inadequately in the process - but tilling releases CO2 from the soil to the atmosphere.
Indeed, while atmosphere CO2 concentration is around 0.06%, soil concentration often sits around 10%. This is due to bacterial and fungi activity, decomposing organic matter: this is nature's way of storing carbon.
When we till, we release an important part of this CO2 into the atmosphere: this is where a majority of agriculture's emissions come from - hence it is urgent we change our agricultural practices!
Good news everyone, we have no choice! (Professor Farnsworth - Futurama)

Weither it is for oil, agriculture, packaging, electronic devices, ... Ressources are limited, and at our current rate of consumption we will run out of many soon.

Are both the victims and the culprits of the current situations. All the above mentioned points are edicted solely by people protecting their interests.
This is why ultimately, the solution can only come from the people.
Each time you turn your car, the AC or the heating on, you are making a decison.
Each time you purchase something, you vote with your cash. Do you know how many kilometers that product did to reach you? Why is a six pack wrapped in plastic cheaper than one bottle without plastic wrapping?
When you take a job 150km from your home, you preoccupated more by the time lost in traffic than by the impact on the environment...
There is a clear misalifnement between our environmental wishes and what we effectively do to reach them.

Is the very blood of our civilisation, without it we would quickly fall back into the middle ages.
We are patting ourselves on the back that the percentage of green energy in the total energy mix is raising.
The main issue of this vision, is that is does not show that discarding the %, the amount of "non-green" energy is raising even faster.
The following image (original source our world in data) Gives a good representation of the problem at hand. 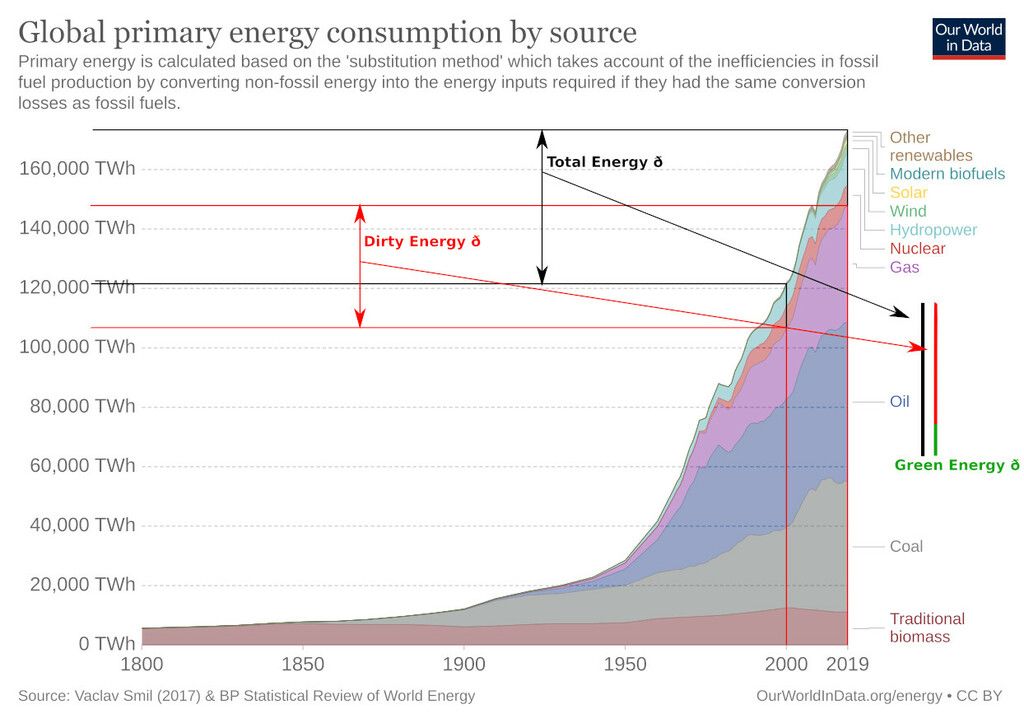 When looking for a culprit, everybody pretends to be doing his best:
- Governments are taking measures.
- Companies aim to be carbon neutral
- People take public transports and buy electric cars
This simply means that we are not doing enough.

World population has grown from 2.6bn people in 1951 to 7.8bn in 2020: this is a 3* increase source: world of meters, world population.
During the same period, total energy consumption grew from 25.000TWh to 170.000TWh, which is close to a 6 times increase.
Hence the issue is due to both: tripling demography, and a doubling of emissions per person!

The most straightforward solution is the most difficult for human beings: change our habits!
--> REDUCE - REUSE - RECYCLE (in that order)

The conclusion is simple, if we want the next generations to enjoy some quality of life, we must individually take as much steps as we can towards preserving our planet.
There is a time for growth and a time for consolidation - the time for consolidation has come.
We should not expect to see the change unless we are the change - so how can we be the change.
- Don't aim for carbon neutral, aim for carbon negative.
- Consume less - replace less!
- Limit transports, both for you and the products you purchase.
- Avoid plastics and chemicals where you can.